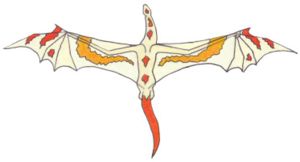 One of three Turkish eggs sold to the British in 1806 is an Akhal-Teke. It survived the transit in the shell back to Britain and was presumably quarantined in Ireland to prevent it contracting the Dragon Plague, following it's hatching it will be expected to serve in the Aerial Corps.