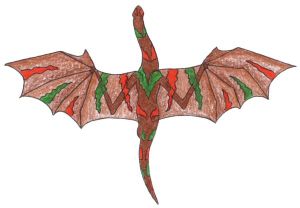 Dakota and his rider were captured while raiding. He was sent to Britain for, in apparent exchange for Praecursoris. His breed is very fierce. The breeders were very excited to get such a different type of dragon, until he infected the British dragons with a type of lingering sickness, later known as the Dragon Plague, that even affected Temeraire (who was on his way to China).

Note: The breed of the dragon is Dakota, his given name is unknown.