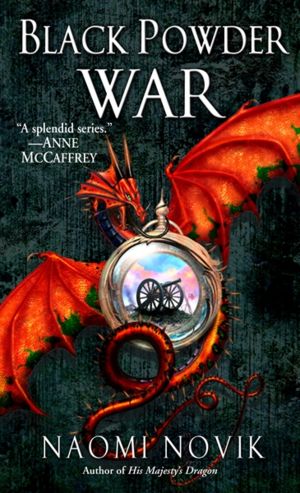 Iskierka's egg was purchased from the Turkish government along with two others. Temeraire's crew was sent to retrieve it, but were denied access to the eggs. Knowing that her egg would soon hatch, they stole the eggs and fled Turkey. Temeraire was given the task of "nurse-maiding" the two surviving eggs (one cracked during their flight). Iskierka emerged in the middle of another daring escape. She already knew about the hatching process (from Temeraire's teaching) and announced she would name herself. She is very feisty and not just a little bloodthirsty. She often causes trouble because she believes herself a better fighter than she truly is, considering she's still just a hatchling. As she grew she had to be chained to stop her leaping into battle with full grown dragons, and even once threatened Temeraire over a cow, something she quickly regretted as she was barely a day old at the time. She thoroughly enjoyed the chance to flame at several chasing dragons during the escape from Danzig.