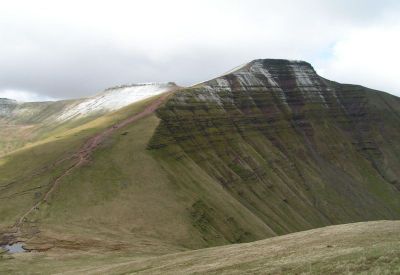 Pen y Fan was one of the three British breeding grounds, the other two being located in Ireland and Newfoundland. It was located in Wales, approximately 30 miles north of Cardiff and 25 miles northeast of Swansea, centered around the Welsh mountain called Pen y Fan.

Aside from being fed and having access to fresh water, the dragons at the breeding grounds were left to their own devices. They were left to find their own sleeping spots in caves or clearings. Dragons who were thought to be possibly ill or injured were checked up on by the staff surgeon.

Besides arranging feeding times, the duties of the grounds-master, Lloyd, and his staff included collecting any eggs that were laid on the grounds and taking them away to a warm, safe place for hatching. The dragons generally cooperated in this, as they knew the humans would take good care of the eggs. However, feral dragons sometimes hid their eggs to avoid having them collected.

Entertainment consisted of whatever the dragons could devise for themselves - games, mathematics, sleeping, etc. Dragons still serving in the Corps were brought in periodically for breeding visits, sometimes quite without regard to the desires of the dragons themselves - see, for example, Bellusa. However other dragons, such as Messoria, seemed to regard the process more warmly.

The occasional courier might also drop by with a message, and Lloyd was not above letting human visitors in, in exchange for tips. Additional news could be garnered by making an arrangement with Moncey, an enterprising Winchester. Winchesters being rather common, Moncey could slip off the grounds to mingle with other Winchesters on courier duty and was willing to do so in exchange for food to make up for his missed meal at the breeding grounds.