Difference between revisions of "Siege of Danzig"

In the Winter of 1806, after the defeat in the field of the Prussian and Russian armies, the French laid siege to a number of fortified garrison towns. During this time the French began experimenting with new uses for their aerial corps. One of these uses was as a transport for large numbers of infantry and artillery, both men and weapons. This approach meant that the French could place a large section of their forces at each siege and move it on once it was no longer necessary. Given this overwhelming show of force the majority of towns capitulated after only a token resistance. This again, meant that the French had a larger available force to field at the next siege. 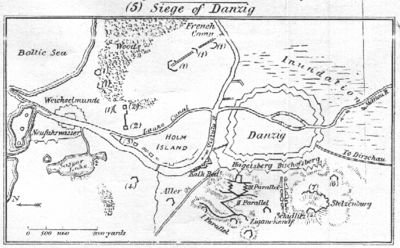 The town of Danzig, under General Kalkreuth, was besieged by Marshal Lefebvre's forces around November 8th. Approximately one week later Temeraire, captained by William Laurence and the newly hatched Kazilik, Iskierka, harnessed by John Granby arrived at the town sneaking past the besieging forces under cover of darkness. General Kalkreuth had no intention of surrendering to the French as so many other towns had done, but the presence of Temeraire, made the town a priority target for the French, influenced by the desires of Lung Tien Lien, who at this time was a close confidant of Napoleon Bonaparte. With little choice seeming left to him, General Kalkreuth intended to sally against the French before their siege fortifications could be completed, hoping to buy time for the British Aerial contingent to escape. This diversion was deemed necessary as, since the arrival of the British, the French had a Fleur-de-Nuit present at the siege, and its excellent night vision prevented the British from escaping under the cover of darkness.

By the end of the Siege, the garrison contained approximately 15,000 fighting men. In addition a little over 20 Dragons were present. Temeraire and Iskierka had been joined at the town by a pack of feral dragons enticed into service by the prospect of a regular and abundant supply of excellent food. As the garrison prepared to rally against the French, a new option was presented to the General by Temeraire. The dragons present in the town were equipped with makeshift harnesses fitted with passenger straps modeled on the Chinese public transport system.

By managing to sedate the French Fleur-de-Nuit using a drugged sheep, Tharkay provided the besieged forces with the opportunity the needed to make their evacuation. Approximately 15,000 fighting men were removed from the town, by means of dragons shuttling backwards and forwards between the garrison and a British fleet located in the Baltic Sea at the mouth of the Vistula River.

The Siege of Danzig and more importantly its evacuation was significant in a number of ways. Initially the population of the town lived in close quarters with a number of dragons for an extended period. This meant the usual European image of dragons as barely controllable beasts could not persist under such circumstances. Perhaps most importantly the strategy used to evacuate the garrison was conceived by a dragon, Temeraire, and this forced the garrison commander to recognise that dragon intelligence can be at least equal to a human's. Finally during the evacuation itself, 15,000 men were transported quickly over a not insignificant distance by dragon back. This, in addition to the innovations used by the French in the preceding months, would have a significant impact on the use of dragons during war in the future.