Difference between revisions of "Tswana Kingdom" 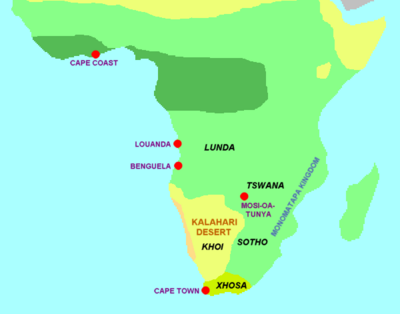 A southern African kingdom, a conglomerate of tribes previously found in the area united under the leadership of King Mokhachane I (d) as an alliance against the slave taking of Europeans and other African tribes. Officialy, it was founded in 1807.

The Tswana Kingdom is notable even among African nations for its practice of elephant breeding. As other nations herd and breed cows or sheep, the Tswana Kingdom have bred elephants for size and docility to provide food for its large dragon population.

Among the tribes of the Tswana Kingdom, the common practice is for dragons in the shell to be cared for as the vessels for the reincarnation of tribal elders. The eggs are told stories of "their" previous life, and are accepted as part of the family they are to be born into. After hatching these dragons share the local belief that they are the reincarnation of the departed elders and will refer to the still living members of their previous families as wives or children and so on. See Dragon eggs for additional details.

For the various tribes of the region, Mosi-oa-Tunya was the ceremonial capital. It had a dramatic scenery because of the enormous falls and deep gorges. With time, in the steep cliff walls people and dragons drilled a series of caves which were meant to provide shelter. The place was also used for gold-mining.

In 1804 Mokhachane I (d) gained control over Mosi oa Tunya and was acknowledged as the king.

After William Laurence pointed out Mosi-oa-Tunya on a map to the French, as the location of the cure for the Dragon Plague, a French expedition was sent to Africa. Later, it was revealed that the French not only secured the mushroom, but that they gave the Tswana Kingdom aid in the search for their missing people.

After burning the African slave ports, the Tswana began attacking cities on the Mediterranean. The British were able to repel them at Gibraltar (presumably because of the covert there and Admiral Portland) but other cities were not so lucky. There were said to have killed ten thousand people in France and Spain. Still, Napoleon Bonaparte gave the kingdom his dragon transports so they could sail to the Americas, where their missing people were more likely to be found. This coincided with Bonaparte's war in the Iberian Peninsula, so the Africans were directed to the Portuguese and Spanish colonies in particular. Rio was said to be burnt to the ground.