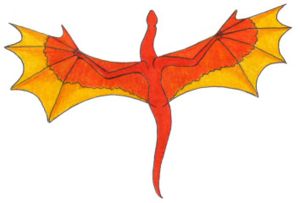 According to Sir Edward Howe, this breed was crossed with the Spanish Cauchador Real to create the Regal Copper. The cross was suggested by Roger Bacon.

The Bright Copper is notable for it's disproportionately large air sacs. This trait was successfully bread into the Regal Copper and is responsible for the breed remaining effective at it's massive bulk.