Difference between revisions of "Celestial" 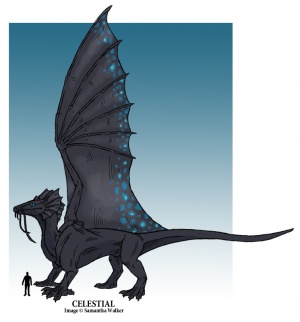 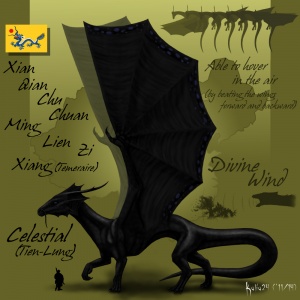 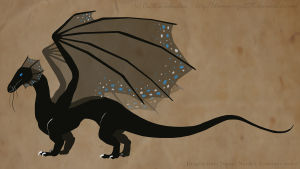 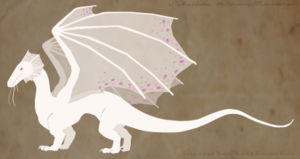 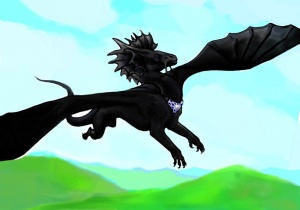 Celestials are an extremely rare Chinese breed of dragon, exclusively able to employ the "Divine Wind." Only members of the Emperor's family are permitted to be companions to Celestials. According to Lung Tien Qian, there are only eight Celestials in the world, listed above.

All Celestials are so closely related that they do not mate with one another; instead, they mate with Imperials to produce Celestial eggs. In fact, it was believed that Celestials could only mate successfully with Imperials, until Temeraire produced an egg with the Kazilik Iskierka. Occasionally, the mating of two Imperials also results in a Celestial. It is not known whether Celestial/Imperial matings may produce Imperials.

Because of this interbreeding, Celestials are very similar in appearance to Imperials and share many common traits. Indeed, the two breeds may appear identical until a young Celestial matures and grows a head ruff and facial tendrils. Sir Edward Howe initially misidentified the young Temeraire as an Imperial, though perhaps someone more familiar with both breeds could readily distinguish a Celestial hatchling or its egg from their Imperial counterparts. If not, this might shed light on the Chinese custom of delaying a young dragon's choice of companion for more than a year after hatching, although Temeraire's ruff and tendrils sprouted when he was no more than six months of age.

Like Imperials, Celestials are usually darkly colored (with the exception of Lung Tien Lien) with blue markings. Their dark coloration fades with age, to the point of becoming translucent and colorless. They have five talons on each foot and their wings have six spines, as opposed to most dragons' five. They are able to beat their wings forward and backward, which gives them the ability to "hover" in midair.

By British standards, Celestials are somewhat "overlong" for their weight. While nearly as tall as Regal Coppers, Celestials weigh about half as much, which still puts them among heavy-weight dragons.

Sir Edward Howe also noted that the way in which Temeraire carried his tail was "very odd, not characteristic at all" of the British dragons that Sir Edward was familiar with. Temeraire carried his tail off the ground, lashing the air gently as he walked, whereas Regal Coppers such as Maximus drag their tails behind them. It is not known whether Temeraire's tail carriage is typical of Celestials in general.

Another distinguishing feature of Celestials is that where most dragons lose their early facility with language acquisition and memorization after about their fifth or sixth week (according to Joulson), Celestials retain these facilities throughout their lives. Imperials do so as well; Lung Qin Mei passed her first examinations in China with honour three years after she was hatched, and a certain Korean Imperial managed to learn French in a month, as le Comte de la Pérouse reported in his journal.

In Blood of Tyrants, Matsudaira informs William Laurence that Celestials may not be a Chinese breed at all, but Japanese. According to Matsudaira, "Such a dragon [a Celestial] has not been seen across the sea for five centuries, since the servants of the Yuan emperor stole the last egg of the Divine Wind line from Hakozaki Shrine as he withdrew in ignominy from his attempt at conquest, his murderous beasts having slain the rest of that noble line." (Blood of Tyrants, p. 49)

The "Lung Tien" in the Chinese names of Celestials means "Dragon Celestial".

Hakozaki Shrine, a Shintō shrine in the Japanese city of Fukuoka mentioned by Matsudaira as the place where the last Celestial egg was stolen, was invaded by the Mongols on November 19, 1274. Japanese defenders were pushed back from the several landing sites. In the ensuring skirmishes, the shrine was burned to the ground.

The shrine is highly ranked among the many shrines in Japan. In 11th century or 12th century, the shrine was ranked as Ichinomiya (一宮; first shrine) of Chikuzen Province. At the end of the 13th century, Chikuzen was the landing point for a Mongol invasion force, but the main force was destroyed by a typhoon (later called kamikaze: "divine wind").

In Shinto belief, Hakozaki Shrine is dedicated to the veneration of the kami (god) Hachiman. In Japanese mythology, Hachiman (八幡神 Hachiman-jin/Yahata no kami?) is the Japanese god of archery and war. He is also divine protector of Japan, and the Japanese people. Therefore, Imperial house, Genji (Minamoto clan) and most samurai worship him. The name means "God of Eight Banners", referring to the eight heavenly banners that signaled the birth of the divine Emperor Ōjin. Since ancient times Hachiman was worshiped by peasants as the god of agriculture and by fishermen who hoped he would fill their nets with much fish. The crest of Hachiman is in the design of a mitsudomoe, a round whirlpool or vortex with three heads swirling right or left.

At the time of the Mongol invasion, Emperor Shengde Shengong Wenwu, or "Kublai Khan", grandson of Genghis Khan, was emperor. He also founded the Yuan Dynasty and Great Yuan Empire in China, sometimes regarded as an extension of the Mongol Empire.