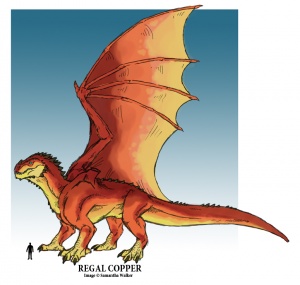 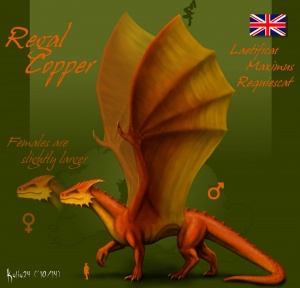 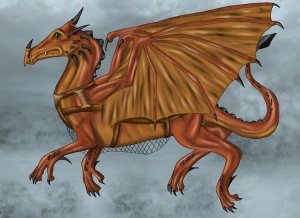 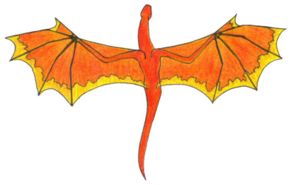 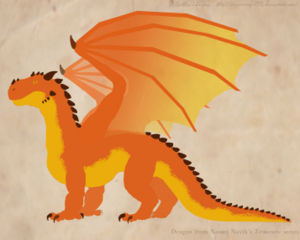 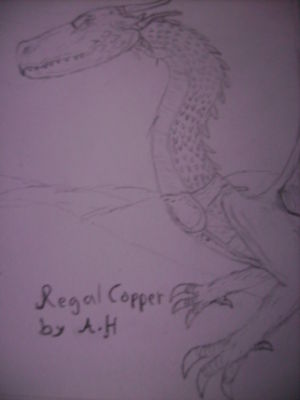 According to Sir Edward Howe, Regal Coppers were descended from the Spanish Cauchador Real mixed with the smaller British breed known as Bright Coppers. It was a successful breeding experiment, as Regal Coppers were both larger than their ancestors and better able to sustain flight over distance. They were not prolific, with only four or five Regal Coppers born in a generation.

Regal Coppers had extremely large internal air sacs to support their own weight. Dorset said that Regal Copper dragonets sometimes "exhibited a negative total weight" (i.e., floated in the air) while growing to full size, which in those cases was at least twenty-four tons.

Mature Regal Coppers weighed as much as 50 tons and were as long as 120 feet; the British believed them to be the largest breed of dragon. Their colouring was dramatic, shading from red to yellow, with variety between individual dragons. Female Regal Coppers tended to be slightly larger than males. Mature males developed forehead horns, and both sexes had a spiny column along the back, which made matters difficult for enemy boarding parties. All Regal Coppers were badly farsighted, requiring nearly their own body length from an object to see it clearly; at ground level, they would rear up onto their hindquarters to focus on something at their feet.

Regal Coppers were among Britain's most valuable dragons at the start of the 19th Century. When Temeraire's egg was captured from the French, the rare Chinese Imperial and Celestial breeds were known only to European scholars and no previous determination of their worth had been made; the prize value of Temeraire's egg was declared equal to a Regal Copper's egg (55000 pounds), a mark of the importance of both breeds.

It was considered dangerous to keep two male Regal Coppers together, or they would fight. Dragons were generally reluctant to fight smaller dragons. Since Regal Coppers were both rare and very large, a male Regal Copper would rarely have the chance to meet another dragon his own size and therefore worth picking a fight with.